Mr FD and I have been busy this morning – and we are feeling very satisfied! Despite the grey, overcast weather, we set to in the courtyard and on the balcony.

Mr FD  planted two courgette plants, some carrot seeds and bean seeds to go in the courtyard. He tidied things up too, so hopefully we’ll have some veggies this year. We’ve put them in the courtyard so George can’t eat the seedlings – last year I planted beans and got a grand total of two bean pods because George either ate the seedlings or the burgeoning pods. And that was despite me putting netting around! The problem in the courtyard is slugs and snails however – there are many of those and we don’t really want to put down pellets. Just gently discourage them from eating our plants!!

Courgette plants in the long planter, beans in the blue planter, carrots in the black box. The rose is doing quite well – a gift from Mij and Bill for our 25th Wedding Anniversary- and the lavender too.

I can’t remember what we planted in the washing up bowl last year – some kind of summer bulb – but it seems to be doing well. The garden chair that it’s on is broken, which is why the plants are on it. I’ve bought a couple of plant holders that might work on it too.

I was happy to see that the lily-of-the-valley has taken. This is the one plant that’s blooming, but further into the shade there’s lots more plants that are growing. I’m really pleased and hope that they’ll spread.

There are some other seedlings growing from some seeds for shady areas (also good for birds) which I sowed about a week ago.

The Bleeding Heart is strutting its stuff as well.

You can see it at the right hand side of the first photo. It blooms until about June, when the buddleia which shares its space starts to take over.  I sowed a lot of seeds for shady (and dry) areas here too. It’s not good soil, so I don’t know if they’ll take (or survive the slugs!) but we’ll see.

While Mr FD was working in the courtyard I was on the balcony. A couple of weeks ago it looked very sad and unloved:

I’d just bought the plants that are hanging up in plastic bags  – it’s not a new type of hanging basket! They are hanging up to stop George from snaffling them!

lots of plants are planted, some seeds have been sown (and netting put over to protect them from George the plant eater!) and you can see the new litter tray at the end too. It has been used quite a lot by all the cats, which is good.

The best thing is…

… we have a strawberry crop!! These are in the hanging baskets that you can see to the left. Again, protection from George!! There’s another plant which has been netted over as well, but I’m not sure you can see it, in the trough above the litter tray

In 2010 we had a bit of a food-off. Our fiercely patriotic French friend would not concede that English cheese and paté could possibly be as good as the equivalent French produce.

So Steve & Cathy – who owned a holiday home here – brought a selection of British cheese & paté when they arrived for the summer, and we had a comparison of the various foodstuffs.

Discussion is getting heated!

After yet more wine had been consumed Alison started to wear what I think is a light-up nose. But I’m not totally sure!

Mr FD still upholds his view that Stilton is the best cheese in the world, heads above any blue cheese the French have to offer. As I don’t like blue cheese, I cannot possibly comment. However I am a fan of the wonderfully creamy Brillat Savarin (French, I’m afraid!).

As I have got older my tastes have changed, and I no longer like the strong flavoured cheeses: a camembert cru with calvados washed rind no longer “does it” for me. Mr FD enjoys a cheese that makes your tongue squeak of its own accord though!

And a final cheese memory…

I still remember going on holiday with my parents and they bought lots of “stinky” French cheese. Somehow, one of them rolled under the seat of the car and was forgotten about. The aptly named Livarot (as although it is pronounced properly as Leev-ah-roh, it is known in our house as “liver rot”) was discovered – through our olfactory senses – some weeks later. We didn’t eat it!

I have been following – and using – a calligraphy/art blog called The Postman’s Knock for a while now, and love the tutorials that the very talented Lindsey gives.

It is my friend’s Christian “birthday” soon – we became Christians very close together, and I know that for J it is important to celebrate this. She sends me a card each year, and I send her one. When we lived in the UK, it wasn’t a problem if I forgot, as my “birthday” was 5 days before hers – just enough time to organise and send a card as she would always remember and send me one!

I have to be a little more organised now, but it’s in my diary, so I usually remember. Being ahead of the game, I made a card for her today. I don’t think she reads this blog (sorry if you do and I spoil the surprise!) so here it is:

and a close up of the wreath and calligraphy:

I used the tutorial here and although my wreath is nothing like as skilled as Lindsey’s, I’m still quite pleased with it. I hope J will like it too.

Pompom has received her tree zentangle. I think she likes it, as she sent me a lovely message.

Here is the zentangle I sent:

I was quite pleased with it – I’m experimenting using colour a bit more, since I found my little Daler-Rowney water colour pallette, that I bought in 1999 to take to Iona. I don’t pretend to be very good at it, but it adds some interest.

If you’d like me to do a zentangle for you on a particular theme, then please leave a comment. I can’t guarantee when you’ll get it, as I’ve already had requests for a TARDIS, a Beatles themed one, a horse and a fox. But I’ll get to you eventually, if you’d like something.

This is going to be a short post, as I only read one-and-a-half books this month.

The half- a-book was “The Last Kingdom” and I reviewed it last month – it started well, but actually I found it quite tedious at the end.

The other was the third book in the Languedoc trilogy by Kate Mosse. I read the first, “Labyrinth”, about 6 or 7 years ago.

I  enjoyed it, as I am quite interested in the Cathars, and that period of history, although I did feel that some of the writing was poor. It was an engaging story, (if a little far fetched – but then time-slip fiction is, by its very nature, far fetched!) and I was looking forward to the second in the series.

I was disappointed by this – less engaging central characters, less interesting period of history, even more far fetched. When the third in the series was published, I didn’t bother with it, as I assumed I would be disappointed again. However, as it was on a cheap Kindle offer from Amazon, I decided to take a risk… 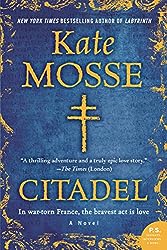 I’m glad I did. Set in the second world war, exploring the story of the Resistance, and an all-women Resistance group, I really enjoyed it. I will say that the “supernatural” time-slip part was a bit ridiculous, and rather “Raiders of the Lost Ark”-ish, but I suppose the author felt she had to continue the theme that had been set up in the previous books.

The Amazon site describes the book thus: Combining the rugged action of “Labyrinth” with the haunting mystery of “Sepulchre”, #1 bestselling author Kate Mosse’s eagerly awaited Citadel is a mesmerizing World War II story of daring and courage, in which a group of determined women fighting for the French Resistance risk their lives to save their homeland . . . and protect astonishing secrets buried in time.

France, 1942. In Carcassonne, a colorful historic village nestled deep in the Pyrenees, a group of courageous women are engaged in a lethal battle. Like their ancestors who fought to protect their land from Northern invaders seven hundred years before, these members of the resistance—codenamed Citadel—fight to liberate their home from the Nazis.

But smuggling refugees over the mountains into neutral territory and sabotaging their German occupiers at every opportunity is only part of their mission. These women must also protect an ancient secret that, if discovered by their ruthless enemies, could change the course of history.

A superb blend of rugged action and haunting mystery, Citadel is a vivid and richly atmospheric story of love, faith, heroism, and danger—and a group of extraordinary women who dare the impossible to survive.

It is 680 pages long, so I’m not surprised it took me most of the month to read! I’m glad it was on my Kindle too. In my opinion, despite the slightly ridiculous showdown, it is the best of the three in the series.

I left a comment on Ang’s blog today – she had posted about an Unthanks song – and I wanted to point her in the direction of another Unthanks song which I really love. And as I listened to it again, having found the YouTube video to link to for Angela, I thought I should share it with a wider audience.

It is a song that never fails to move me – partly the beautiful sound of the colliery band that plays along, but also the story of a working man who never lost faith in his pigeon.

Here is the Unthanks performing “The King of Rome” at the 2012 Folk Music awards.

Apparently, the bird is stuffed, and in Derby museum, and there’s also a Wikipedia article about the pigeon: 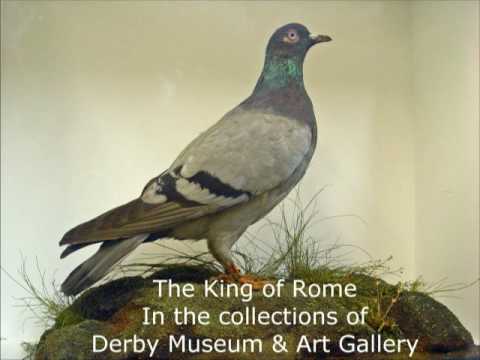 Some of the words are beautiful…