I have been AWOL for a few weeks – no excuses, really. My weekends seem to have been full of preparing for lessons the next week, going to church, or boring things like ironing and cleaning. Or just being too *hot* to do anything.

Last weekend though we were away with the Cyclos near Bedouin, Mont Ventoux. Mr FD didn’t cycle up Ventoux, but he did some other rides. I visited a lovely Abbey

and other things. Which I will tell you about.

BUT I’m working all this week, and leaving for 4 week’s work in the UK (back to Lines Summer School!) on Monday so I don’t know if I’ll have time to blog before then – washing, ironing, packing (I haven’t thought about what I’m taking!), route planning etc. So I may be absent for a while. It’s not that I don’t love you – it’s just that time may be short.

I hope everytone has a lovely summer, and I’ll be back at the end of August – but if I have time while I’m away, I might pop in to say hello!

Back in February I started a little series “Pictures Round the House” showing you pictures in our house that are special, and telling you why they have a special place in my heart. Well,after a hiatus, here’s another in the series.

This is a drawing of Alton Abbey, in Hampshire:

This drawing dates back to my days at college in Winchester,when some of us from King Alfred’s College (as it was known then) would go, once a year, for a weekend’s silent retreat at this Benedictine abbey some 20 miles away from college.

This picture, from their website, shows this very view (although the tree has grown quite a bit in the 36 years since it was drawn!):

We would leave college on Friday, and join the monks for dinner. After the first talk, given by either Norman, the college chaplain, or someone else, we would take part in Compline, and then the Great Silence.

Generally, after that, we kept to the silence. There were talks to attend, but also lots of free time for reading, meditation, or other activities, such as drawing. I suspect I usually did some calligraphy or reading.

After lunch on Sunday, the silence was broken, and we went back to our everyday lives. But it was always a little difficult coming back to the “outside world”, as it were. This picture was drawn for me by my at-the-time boyfriend. I have to say, I think I treated Ian very poorly – he was much more devoted to me than I was to him, I fear, and I would often refuse to hold his hand in public. I was a tad embarrassed by the fact he was a lot shorter than me – which is no excuse, really.

Taped to the back of the frame is a piece of paper with “The meaning of life is love. Only true love comes from God” written on it in Ian’s handwriting. I think I had the picture framed much later, so I imagine this came from something he gave me at another time.

In my old scrapbooks, I also have a pressed rose that he gave me, plus a card with an apple seed…This was at the end of our third year, when I was staying on for an Honours degree, but he was going to leave. In the card he wrote the words from a song in the play “Sergeant Musgrave’s Dance”

I plucked the blood red rose flower down, and gave it to my dear

I set my foot across the sea, but she never wept a tear.

One day I came home, as free as a bird, I sought her out and in

At last I found her in a little attic room, with a napkin round her chin.

“No I am eating an apple given me today, the sweetest I could wish”

The blood red rose has withered and gone, and fallen to the floor.

But he who brought the apple down shall be my darling dear.

For in that apple a seed shall grow, to raise a flourishing tree of fruit,

To live in love and lengthy joy forever and a day” 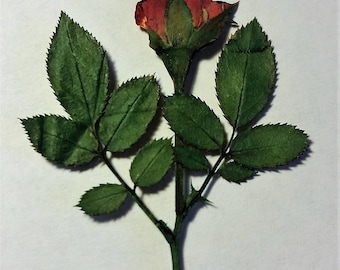 I don’t know the play, but from Wikipedia it seems to be a play about pacifism, about revenge and about violence…I’m not quite sure how this fitted with something that I imagine was showing love. I think Ian thought I was cleverer and more astute than I really am, as he also wrote a cryptic letter that includes the words “I know what your problem is, if not better than you do yourself. If you know what I am driving at, then so much the better. Please remember, if anyone can help you, it will be me”

I don’t think I realised then that I had a problem, and I had (or have!) no idea what he was driving at! And I’m not sure if he helped me with whatever was the problem!

Here’s a photo of the card that included the cryptic poem and message!

We lost touch, and I heard a while after that he had converted to Islam, and married a Muslim girl who had been one of his pupils at the school where he was teaching. It was after the 11th September attacks, that a mutual friend sent an article from the Church Times, written by an RE advisor (I think) who was, from the accompanying photo, clearly identifiable as our estwhile friend Ian. The article spoke about how the attacks were not representative of true Islam, and that Muslims and Christians needed to work together, for peace and reconciliation. I wrote to him and we corresponded briefly, but I didn’t really feel any real warmth in his reply, so I let the matter drop.

Still, I do feel a lot of affection for this man – even if we were never really compatible, he showed me a lot of love, and kindness, and he was a very good friend. I wish him well, and every time I look at the lovely picture of Alton Abbey that he drew for me, it reminds me of happy, contented times at college, and my good friends.

I know I’ve just posted, but …

With all the shittiness of the recent terror attacks, in Manchester, in Kabul, in Egypt, in London, and in other places around the world, I feel wordless.

Yet two different things have helped.

The first are the words of another blogger, Katy Boo,who always seems to have the right words to say. She writes forcefully about matters close to her heart. She does not mince words. She is funny, and she is emotional, she is an activist and she is a wordsmith. Her most recent post The Answer is Still Love is a heartfelt message of love in the face of terrorism. I urge you to go and read it.

The second is a new song by Rend Collective. “Weep with Me” is a lament, in the tradition of the Psalms, and is another message of love

As always, Rend Collective have managed to write a song that meets my need, and says what I fail to be able to say.

…that Sgt Pepper, apparently, taught the band to play…

and it was  40 years ago today (well, a few days ago really!) that I made my “Yes” to God. I’d been getting there for quite a while, through the guidance of the ministers at the Methodist Church I attended, and the Gideons who visited my school, and one of whom was gracious enough to invite a questioning young woman to her home to discuss what was going on in her heart. But it was at a school Christian Union meeting that I finally conciously pinned my colours to the mast of Christ. Led by another girl at the school, and the speaker, who was a member of the house church that this girl belonged to, I said Yes.  26th May 1977.

I only remember the date thanks to a my dear friend Jane. She usually went along to the CU meetings with me, but this particular week she didn’t come. When I told her about what had happened, she was disappointed she’d not been there, but came along to the house group meeting with me the following week, and there she too said a resounding Yes to the invitation of God. Now, Jane is faithful in remembering the date and sending me a card every year, on my “birthday”.

Now, I’m much more forgetful/ lackadaisical/ careless / call it what you will than her, and I’m afraid I rarely remember the auspicious date (even though it’s a day after my wedding anniversary!) However, thanks to the fact that there’s 5 day’s difference,  receiving Jane’s card usually gives me enough to get off my arse to send her a card. Even living in France, the 5 day gap is usually enough.

Sadly, this year the postal sysytem let Jane down. I can’t imagine that she was late sending it, so it must have been the postal service! Her card to me didn’t arrive until 1st June! Too late for me to arrange for a card to be sent! Too late even for an email! I let her down.

So yesterday, I had time to make her a card:

I have written an apologetic letter too, but I do feel bad that I let down a good, dear friend. I’m sure she knows how flakey I am, and I hope she will forgive me. Still, there are no excuses.

I’m also sending her one of these lovely little bracelets:

called “A friend loves at all times” from Katy Day designs

I hope it will remind Jane that I do love her, and she is a dear friend. It’s just that I’m a bit rubbish at remembering dates!

Hello dear readers. I hope you are well. The weather here has been hot, hot, hot – I’m not very good in the heat, but I have managed a couple of walks between lessons. Neither were very long – both about 3 km each – but they were pleasant. I took a spare T-shirt to change into, as I had lessons to go to after the walks, plus some scented body spray, to cover unwanted odours (TMI!) so I wasn’t so worried about looking dishevelled. However, one student did remark on my flushed face!

We’ve had rain today though, which has refreshed the plants on the balcony, and me! I have no complaint about rain today! I made a card a few days ago for one of my students who is getting married today. Here it is:

It was simple to make, but quite effective. I used my little flower punch, with lots of bits of orange/yellow/brown off cuts, plus some embossed card, some recycled ribbon (possibly from those pesky hanging loops inside pullovers) and a few twinkles.

I made another card today, but I’ll show you that, and tell you the associated story another day.

The Zentangle Inspired Art (ZIA) is something I did for my sister’s birthday. I have to say that I really enjoyed creating it, and I’m really pleased with the finished picture.

Click on the image to see it in more detail

I wasn’t sure whether to add a bit of colour – maybe try to paint a sky – but I didn’t have the confidence to do it, as I thought I might ruin several hours’ work with some misplaced watercolour paint! So in the end I left it in black-and-white. It is the iconic Royal Liver Building in Liverpool, with the world famous Liver bird on top.