Here’s another Celtic letter, this time for my M-i-L. This was – like the last – done to take me out of myself, one day when I was feeling very down.The need to concentrate on what I’m doing, which band goes over and which goes under (there are a couple of errors!), where each goes to how and they fit together is an excellent way to lose myself for a few hours.

And for those who are confused by the title…It comes from an old TV programme, called Blockbusters, where the teams had to answer questions beginning with certain letters to move across the grid. Students delighted in asking “Can I have a P(ee) please Bob, ” and then smirking, as this clip shows

One day in December, in that time which seems to be becoming named “Twixmas” (yuck!), between ChristmasDay and New Year, I was feeling rather down so I thought that a bit of concentration on some artwork would help take me out of myself.

As later in the week I was going to see a friend whose name begins with “J” I thought I would create a Celtic knotwork J for him as a gift. I used a book called “Celtic Alphabets” as a guide, and copied the Lion’s Head design – but as J loves cats, I altered it slightly to a cat’s head. It took me a fair amount of time to get right, but in the end I was quite pleased with it.

And, yes, by the time I’d finished I had been taken out of myself! I should remember this for future times… 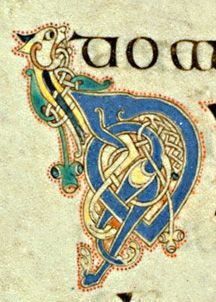 Goodness me – two posts in one day! I could have put this over on Fat Dormouse – & I will probably link from there to here – but I felt this sat better on this blog than on that. Although there isn’t really that much differentiation between them, if I’m honest.

I am looking forward to Lent 2017 (only 19 more sleeps to go!) because that’s when 40 Acts starts. I have taken part in this for three years now, and I really enjoy it. Do Lent Generously is the tag-line, and I encourage you to go over & explore the site, and hopefully sign up.

But I’m also going to do something else, this Lent. A few years ago a friend gave me a box of beautiful postcards from the Bath Abbey Diptychs by Sue Symons

Sue was inspired by Bach’s St Matthew Passion to create the artwork which depicts the life of Christ in 70 images grouped together in pairs or ‘diptychs’. She embarked on the panels in 2005 as a retirement project which combines her two artistic passions: textiles and lettering.

Each of the 35 diptychs includes a text from the Gospels in beautifully decorated calligraphy, alongside a panel of needlework that offers a personal interpretation of each step in the story.“The sheer beauty and invention of the diptychs is stunning”, said Alan Garrow, Vicar Theologian at the abbey.

“It represents an inspired marriage of the ancient skills of calligraphy and illumination with all the freshness of a contemporary interpretation of the life of Christ.”

I have kept these  postcards safe, looking at them from time to time, but really, postcards are meant to be sent, seen and enjoyed.

So this Lent, I’ll be sending these to friends I’ve lost touch with, family members and others. If you would like to receive one then please leave a message in the comments box. If you can give me some way to contact you privately (email address or whatever) then I will get in touch, so I can have your postal address.  I’ve already sent one (though the person doesn’t know it’s on the way!) but if you’d like one then please let me know. They are beautiful.

This is N° 1 already on its way to someone.

If you’re a calligrapher, or enjoy papercreft and drawing, you really ought to know about this blog: The Postman’s Knock

I love it for the inspiration, and the easy to follow tutorials. Today I wrote a couple of Thank You notes to people who had sent me birthday presents. They were really appreciated, as my birthday was rather low-key this year. Mr FD “gave” me a couple of boxes of tiles for the bathroom (every spare euro is being spent on this renovation. I do hope it’s worth it!!) and the cats gave me some chocolates….but that was it, apart from these two lovely presents, & some money. Also going towards tiles!!

Anyway I wrote the letters, and then decided to decorate the envelopes, so I knew where to turn for a tutorial on envelope art. Lindsay has many different ideas, but I went with the lace pattern…I was reasonably happy with how these turned out (click on the photo for more detail):

to my sister, who sent some beautiful tiger-eye earrings

and my friend who sent two lovely pairs of cosy bedsocks.

I think I prefer the first, which is my “riff” on Lindsay’s tutorial, but I think they have both worked quite well.

I told you about my commission to make the Bishop’s Christmas cards this year…all 200 of them! I’m getting on quite well, having completed 45 of them. Only another 155 left to do:

I hope he approves – I couldn’t find any backing paper of the type his assistant approved, so went instead for quite a lot of the red starry paper, which isn’t quite so “elegant”. I also have noted that I really need to be more careful when cutting the backing paper – a lot of them were just a bit wobbley, which meant I had to use more “bling strips” to hide the wobbley edges!

I have used up all the cream ready-folded cards that I bought, but managed to find some more cream card which I had in my stash; I’ve folded this over and so can get on with making another 25 cards today. I personally preferred the red card that I used to make these cards:

as I felt it was more Christmas-sy, but the Bishop veto-ed it, as being too dark to write on. The other paler colours available weren’t (in my opinion) at all Christmas-sy, so I went for cream. Which meant the parchment paper with “Joy…” on didn’t stand out so much.

Anyway, time to find a Kermode &Mayo film review podcast that I haven’t heard, and get paper-cutting and glueing!!

I mentioned in the last-post-but-one about Clare asking me for some Sorry-You’re-Dead cards.

The square at the top is a hole cut into the front of the card, with a strip of the same paper inside. The papers are from a swap or giveaway some time ago, but being sombre colours, with a bright splash, they are perfect for this type of card.

Another using the same batch of papers, and a black ribbon.

This one uses up some scraps in diagonal/ triangular formation.

I have been making LOTS of Thanksgiving and Christmas cards that I hope to sell at the Munich Convocation of the Episcopal Church in Europe – I’m there this weekend. I want to raise money for Phone Credits for Refugees so if I sell them all at 2,50€ (at least!) I should make about 100€.

This charity is a lifeline, especially for the unaccompanied minors living in the refugee camps:

“For unaccompanied minors, the group (Phone Credit For Refugees…) is often the only safety net they have. During the demolition of half of Calais refugee camp in March, volunteers tried to make sure every child on their own had a topped-up phone, with numbers of people they could call. During the chaos, 129 children went missing and volunteers reported that people traffickers were hanging around the edges of the camp for a week afterwards, explains James. ‘It’s really frightening and phone credit is a massively inadequate response, but it is something’.

Ahmed, a 7-year-old boy from Afghanistan, is now famous for texting for help when the lorry he was in with 15 other people ran out of oxygen after it reached the UK. Lesser known is that this Facebook group bought credit for him the week before, enabling him to send his urgent message. ‘For him it was life or death’, says James. ‘I think it is for many actually’. “

Here are some of the cards:

These two use a copied piece of ZIA that I did, and then copied many times. I have used these to make cards, all of which are different, with different “bling” on them, but all featuring “Joy to the World”

These two (and others like them) use a decoupage set I bought in NOZ for about 1,50€. I blinged them up with some sticky gold borders.

Finally, I did a couple of quick bits of calligraphy using these words, to make some other simple cards. I’m pleased with them all. I hope people will buy them. It’s certainly hard to get hold of Thanksgiving cards here in France – and many of the people at Convocation will be American – and also Christmas cards, although becoming more popular, are still not very common,as it is more “Fetes de la Fin d’Année” than Christmas.

Two posts in one day! Goodness me – am I feeling okay?

I used a tutorial on this splendid blog – The Postman’s Knock.

Lindsey is a talented calligrapher, but much more than that too. I have started using her tutorials more and more, as they are so detailed, and produce some beautiful results. If you are interested in calligraphy, card making or creating art then this is a great place to go!

Here is my card:

I know my photography isn’t up to much, but I hope you can see how it has been made. If not, Lindsey’s tutorial will explain all. I hope that Isabelle likes it.

I have been following – and using – a calligraphy/art blog called The Postman’s Knock for a while now, and love the tutorials that the very talented Lindsey gives.

It is my friend’s Christian “birthday” soon – we became Christians very close together, and I know that for J it is important to celebrate this. She sends me a card each year, and I send her one. When we lived in the UK, it wasn’t a problem if I forgot, as my “birthday” was 5 days before hers – just enough time to organise and send a card as she would always remember and send me one!

I have to be a little more organised now, but it’s in my diary, so I usually remember. Being ahead of the game, I made a card for her today. I don’t think she reads this blog (sorry if you do and I spoil the surprise!) so here it is:

and a close up of the wreath and calligraphy:

I used the tutorial here and although my wreath is nothing like as skilled as Lindsey’s, I’m still quite pleased with it. I hope J will like it too.