We were coming to the end of our holiday – it was now Friday – but we had had a great time so far (mostly, give or take a few grumps!) Today we were going to see the Cirque du Navacelles. The what?! you may ask.

Well, remember in geography you learned about ox-bow-lakes? (Having discussed this with an English couple we met, we decided that ox-bow-lakes and the water cycle were the two things everybody remembers from their geography lessons! At least, everybody in the UK) The Cirque du Navacelles is like an Ox bow lake on steroids (without the lake.) 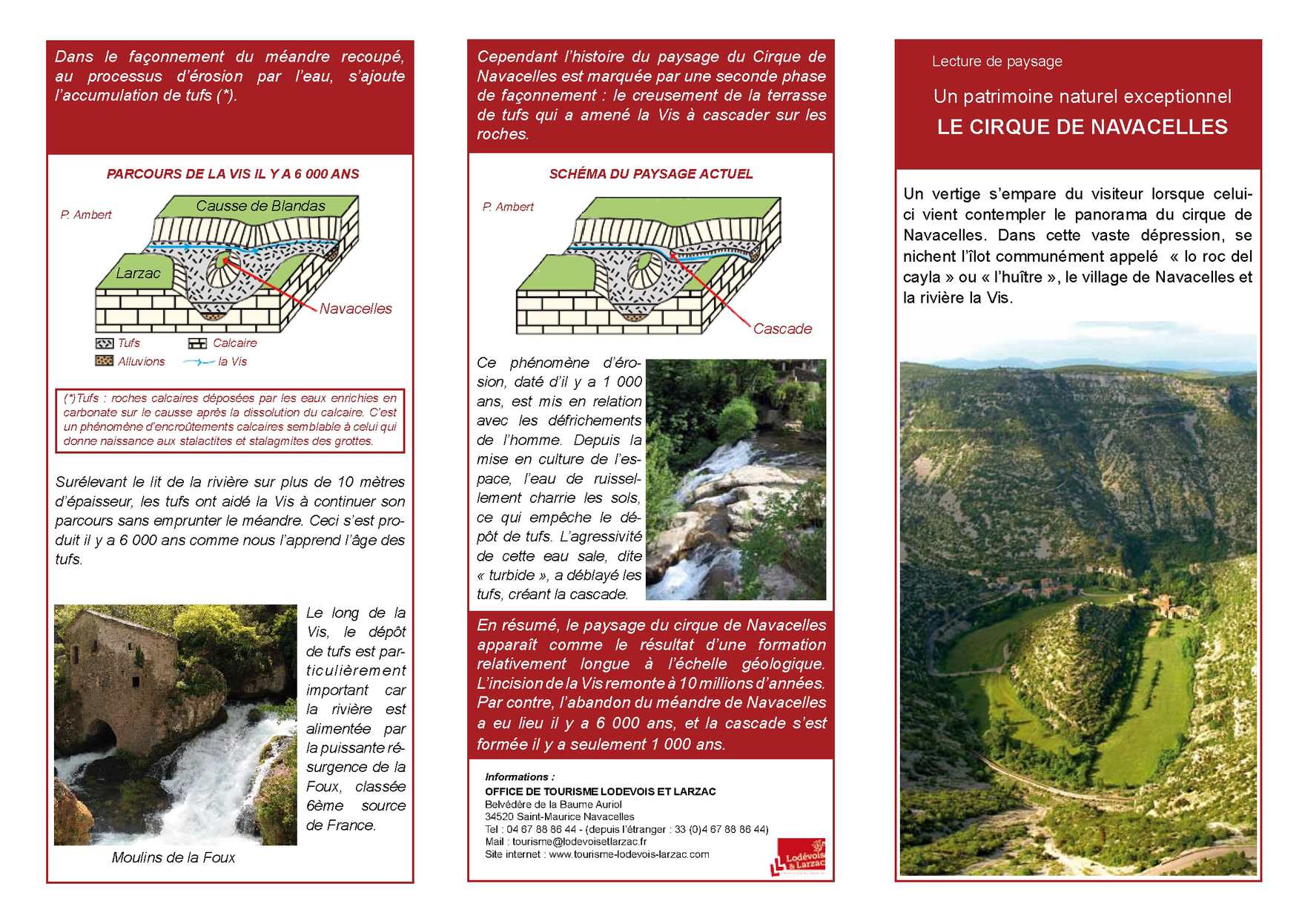 We parked the car near the Visitors’ Centre and strode off to the viewpoint. There were a few people there when we arrived, and they appeared to be having a guided tour, as one woman was explaining the geology of the area.

So we started listening, and when the group moved over to the model of the area, and the guide asked more questions, we joined in! We learned about the rock, and identified different varieties: chalk, limestone, granite, “others”. It was really interesting and fun.

Then, as the group set off we asked if we could join in. The guide said Yes, but it was 6.5 km of walking, and our feet might get a bit wet. Did we have other shoes? Oh, it’s OK, I said. And so we joined in! We paused, so the guide (whose name I didn’t get. Let’s call her Mireille) could point out a cave, somewhere on the cliff face to the left

This cave was used by Protestant worshippers, during the Religious Wars in France – they had to lower themselves on a rope, or follow a dangerous, tortuous path, to reach the place where they could worship in secret. It made me fleetingly wonder if I’d be willing to do that, if I had to…

We then all piled into cars to drive to where the walk “proper” began. This was a descent down to a group of mills, which had been in place for over 900 years. They were built at the point where the river burst out from its underground flow, so these mills harnessed the power behind the water.

It was a real clamber down, and I was grateful for the help of Fiona and Charles, a British couple from Yorkshire (Mr FD was behind us as he and a couple of others had been parking the cars) who helped me down the steepest parts. We paused beside the river to have lunch and then we continued. It was a fairly brisk pace, and I did struggle to keep up at times, but Mireille stopped regularly, to instruct us on different trees and leaf forms, so I had time for a breather.

Then we came to the edge of the river and everyone started changing their shoes.

“Do you not have other shoes?” Mireille demanded.

“No…” I then realised that I had probably misunderstood when she said our feet “might” get wet…!! Finally I waded through the river in my trainers, without socks, and Mr FD started off barefoot. As it was very pebbly, he gave in halfway across, and rather wobbly, he put on his trainers. Mireille was concerned we’d get blisters, if we continued the walk in wet trainers, but actually it was fine.

When we arrived back at the cars, Mr FD, Fiona and Charles and I decided to pause for a beer and an ice cream in a delightfully eccentric little bar. It was good to sit and rehydrate – but I felt inordinately proud of myself! I hadn’t fallen/slipped/given up! Huzzah for me!

We dropped Fiona and Charles at their car and then we paused briefly to pick up something for our dinner. We had salad, a ready meal of Parmentier de Canard, and a lemon cheesecake. Again, sitting outside, enjoying the peace and quiet of our little place!