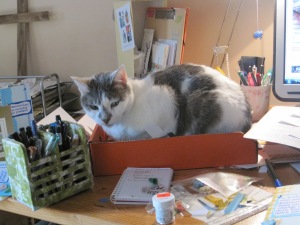 Our lovely Pomme cat is getting old – we don’t know exactly how old, but the SPA reckoned she was about 2.5 years old when we got her 13 years ago. Over the past year she’s been less mobile (but not by much) , more cantankereous and been eating more but not filling out.

Yesterday was her annual vaccination and check up. The vet said that she has renal problems and a failing heart. So she has to have different (expensive) food – though cheaper on Amazon than at the vets – and a daily tablet. Hey ho.

We started yesterday with a worming tablet. Crushed up in tuna, she carefully ate around the bits of tuna with the tablet on, and devoured the rest. So we put her “special” food on top – she ate some of the tablet. We’re not sure how much. Another cat ate the rest…but that won’t do them any harm, as it is only a worming tablet.

Today, the heart tablet was crushed and added to a prawn. Another prawn was offered first. Sniffed and licked…and rejected. Oh. That wasn’t even the one with the tablet in! We may have to think again…

I’m considering crushed tablet mixed into butter and then dropped into her mouth, or smeared on gums. She has no real choice then. But I think today’s tablet might have to be counted as a failure! There’s a video on YouTube about how to feed a pill to your cat, but quite frankly, the cat looks as though he’s been sedated as he is extremely cooperative. I can’t imagine many cats like that! We’ve got to take her back in a month to see how she’s getting on…but we do know she’s not diabetic. Thankfully, we do have some emergency “cat” funds put to one side, as this may start getting a little expensive.

Here’s a Simon’s Cat to make us smile…

5 thoughts on “Cats and Tablets.”