Last week we were away with the Cycle Club on their early-year “Training Camp”. Last year we went to Les Londes, but this year the choice was a holiday village in Frèjus. As it was the school holidays it was quite busy, and the cyclists had some problems with traffic, but it was bearable.

We left St Just at 6.00 am, and planned a rendezvous for lunch at a service station on the motorway. We’ve stopped there before, and know that there is a lot of outside seating for picnicking. The rendez-vous was for 11.30, an early lunch, as there was a ride planned in the afternoon from the holiday village. We arrived at the service station at 10.15, amid cries of “Who the heck suggested we set off so early?! We could have had another hour in bed!!” Never mind…

We had our lunch, eating what we’d brought, but sharing brioche and flapjack too. I shared some of the rillettes with a sweet black cat that was wandering round. I imagine some horrible person had brought her/him to the service station and just abandoned him/her. S/he was hungry, and wolfed down the rillettes, but wouldn’t come near. If it survives the traffic I imagine it will be reasonably well-fed with scraps, but still…it pains me that people do such things. But, even if I could have caught it, Mr FD made it very clear that another cat was not to be allowed.

We arrived at the holiday village, and some of the rooms were ready while others weren’t. So some cyclists could change in private while others, Mr FD included, had to hide their modesty behind car doors as they struggled into their cycling shorts!

All the photos look better in larger format, so do click on them for more detail – should you want to, that is!!

The group photograph was taken: 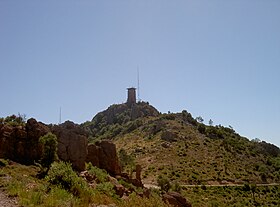 We were all (cyclists included) going up Mont Vinaigre, the highest peak in the area at 614 m. The walkers drove to the main car park of the site, overtaking the cyclists as we left Frèjus town. Having parked, our group set off, but not very far into the walk I found that my back was hurting. To be fair, it was only three days since I’d been to the doctor, but I was a little disappointed.

I stopped in a sunny spot where there was a bench to sit on. It meant I could take photos of the cyclists as they came past:

but, even though it was sunny, it was also quite chilly, as there was a strong wind. I was very glad when the Remedial Walkers arrived back.

We got back after the cyclists, so Mr FD had been waiting for me before he could shower, as I had the car key, wherein were all our bags! After a restorative beer, we had dinner – the food wasn’t great, but for a mass-catering place it wasn’t terrible. I can’t remember what we had to eat, but there was a salad bar to help yourself at, then self service mains (so you could take as much as you wanted. Many people took quite a lot!). Then cheese and desserts. The desserts were mostly of the frozen cake variety – millefeuilles, doughnuts, éclairs – or creamy stuff in little pots, but there was also some fresh fruit on offer too. Most people stuck to water, but I bought myself a 25cl carafe of wine -it was very expensive at 1€! Can you imagine being able to buy a 25 cl glass of wine in the UK for £1?!

There was a short meeting to discuss the following day’s routes and then early bed. As we always do on these weekends, Mr FD downloaded the Kermode & Mayo podcast, and we listened to that in our room – quite often we drift off to sleep and miss most of it, but I managed to stay awake, despite my outlay of 1€. Mr FD was snoring for quite a lot of the programme though!

That was Day 1. Day 2 to be recounted at a later date.