“Only Lyon” is the logo of the city of Lyon…it’s quite clever, but I know some people don’t like it because it’s not French. Which is true. And Lyon is a French city, in all its chicness, history and beauty; however it is innovative and modern too – which some people would argue are not French qualities at all. I couldn’t possibly comment, but I do know that I really like Lyon.

And I spent the day there on Thursday with Friend Cathy, and (for some of the time) with Mr FD. Mr FD had to go to the city to give a presentation of what he has been working on for the past few months. He’s been working for a Government organisation, which is to do with finding training for people in the AuRA area (Auvergne-Rhone Alpes); Mr FD has been doing something technologically clever in the pulling-data-together side of things, and developing a way forward. We are hoping that (and it’s looking fairly certain) he will be employed to develop this way forward for another 3 months. He apparently impressed with his presentation so fingers are crossed.

Friend Cathy and I went along for the (free) ride – as AuRA were paying Mr FD’s travelling costs, he drove and we went with him in the car. We all went to the Confluence together, as the place where Mr FD was to work that morning (final tweaks) before his afternoon presentation is just by the Confluence.

This area, where the two rivers of Lyon meet – the Saone and the Rhone – was the industrial port of Lyon. However as times changed so has the area. It is now becoming a new trendy place,with a shopping centre, bars and clubs along the waterfront, as well as new “industries” setting up there – radio stations and other media. The buildings have either been modernised,

like the old sugar warehouse which is now an arts centre, or completely rebuilt

Really not sure what this is!!

We left Mr FD to work, planning to meet him for lunch, while Cathy and I went for a coffee, and then a stroll along the waterfront to the very tip of the Presque-Isle, or peninsular.

Looking back towards Lyon

There are dinky little shuttle buses, which, when running properly, will be driverless, running on electricity and taking passengers from one end of the area to the other (about 1.5 km) Although we walked there, we decided to take a Navlys back Sadly there were some teething problems, so we couldn’t take one. So we walked back.

Here are some of the apartment blocks near the shopping area and Marina, which were, I believe, designed as a look back to the days when containers would be stacked up on this quay.

Mr FD texted to say he was being taken out by his colleagues, so we just bought a sandwich and had that. Then we took the tram back to Part-Dieu, to visit Primark (didn’t buy anything) and to look around the other shops. And finally we went to the Other Cat Café in Lyon.

Mr FD, my sister and I had visited one Cat Café (Le Chamourai)  in June this year. It was quite nice, but a bit crowded and not very clean. To be fair, it was a rainy Saturday afternoon, but I felt that everyone had been crammed in, and there wasn’t much space to breathe. This Cat Café – Le Gentlecat – was much calmer, and very pleasantly laid out. (Though it was a sunny Thursday afternoon, so maybe that’s why!) The cats were just as aloof as in the other place, but we found a table to sit at

and we enjoyed a refreshing iced tea with lemon and lemon-balm.

This page tells you (in French) about the cats that live at Le Gentlecat. We met Guillemette (above) and also Louise:

Alberte and Nicole deigned (briefly) to pause and play with a cat toy, but I spent a lot of time sitting in the tiny courtyard, chatting and stroking Guillemette. We chatted to a group of 4 foreign language students who were studying at Lyon University for a term, and who had decided that this was where they were going to study, as they missed their own cats so much!

After a relaxing hour of cat stroking, we went back to the Confluence to meet Mr FD. There was time for a bit of shopping, and then Mr FD arrived to tell us that his presentation had been successful and well-accepted.

Friend Cathy and I had decided on the evening programme, so we took him off to a waterside bar, where we had a cocktail! Rather overpriced, it must be admitted, but we thought we wanted a treat! So I chose a Grey Goose Cosmopolitan (very nice it was too!)

Yes, it is empty!

Feeling a little tipsy, we dragged Mr FD off to the next part of the planned evening…… 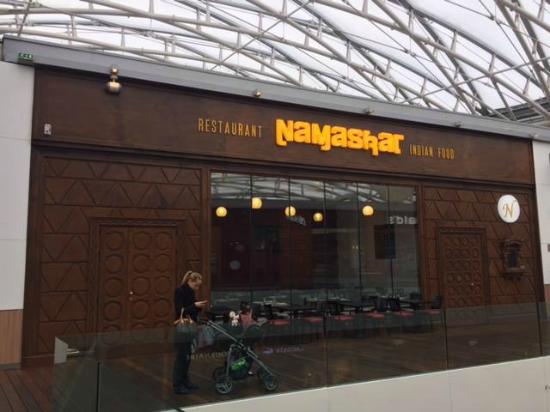 We were the first (and only!) people there, but the waiter/owner was charming. He spoke very good English and offered to “beef up” the spice level to “English” tastes. Mr FD’s chicken biriyani was delicious and my Lamb Saag was also very good. Cathy chose something else equally yummy. The onion bhajis were a tad disappointing, as they were more like onion rings, and there were no pappadoms-and-pickle-tray (sad face) but all-in-all we were very satisfied. 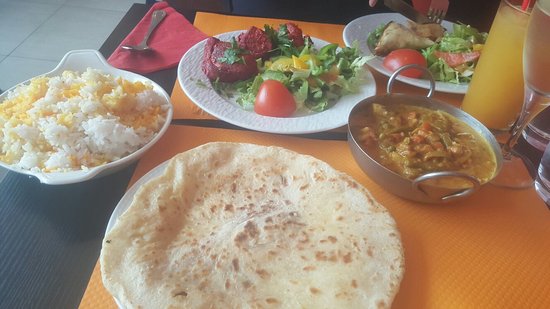 I’m surprised to read some fairly negative reports on the restaurant, with recommendations for other Indian restaurants in Lyon. So maybe we should try those as well. Certainly we were satisfied – the surfeit of yummy-noises that we were emitting paid homage to that!

Generally a very good day out. Mr FD drove us home while Cathy and I sat, dozed and nursed our full stomachs!